← And now for something completely different…
Painting update, at last! → 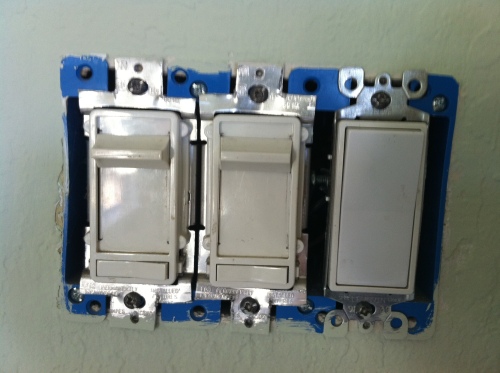 So our house has a lot of dimmer switches in it. Most of them are some variation on a big dimmer and a very small on/off switch. The ones pictured are for our living room. We have no interest in varying the light intensity in really any of our rooms, plus we’re switching out the incandescent bulbs for CFLs, and we’d rather not have to shell out for special dim-able CFLs.

We made our first attempt at replacing a light switch today. The kitchen light switch looks exactly like one of the left-hand switches in the picture, and we wanted to change it out for one that looks more like the one on the right above. We were very puzzled by what we saw after removing the switch though. Sorry I didn’t get a picture, but we had two black wires, one going up the wall, one going down, taped together with electrical tape and then attached to the switch. Eh? Then we had two white wires, one going up, one down, twisted together with a wire nut, and then NOT attached to the switch. Hmm. Then there was a red wire, going up the wall only, and also attached to the switch. The ground screw was definitely not attached to anything, though some googling seemed to indicate that wasn’t too unusual. We were a bit confused at this point, as the instructions that came with the new switch led us to expect one black wire and one white wire attached to the existing switch.

So Dave headed up into the attic (which is apparently filled with blow-in insulation on top of the regular pink insulation) to have a look-see. After a quick trip to the place we’re still renting for a head lamp and some knee pads, he was able to stay up there long enough to determine that the pot lights in the kitchen had most definitely been added after-the-fact, and while a little odd, seem to be wired okay. The red wire was not in fact indicating a three-way switch, which is what some googling led us to believe initially, but was just the normal “hot” wire in a new exciting color added solely to confuse us. sigh. Some more googling this evening has helped me learn that the configuration we saw wasn’t really all that unusual, so we were just being a couple of newbs I guess.

So Dave determined to his satisfaction that we weren’t going to burn the house down. I guess I’m not too surprised, since it’s lasted this long. I’m glad though, that we have a new switch, and it’s controlling four ~25W CFLs rather than one 100W bulb and three 65W incandescents. Here’s what the kitchen lights look like currently: 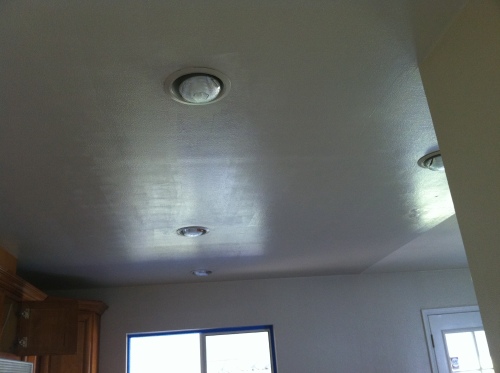 The new bulbs are sticking out a lot, so we’re going to see if we can raise them a bit. They look especially bad when they’re turned on because the ceiling is painted with glossy paint, so it’s very reflective. Ewwwww.

Hopefully the rest of the switches won’t be as exciting, though the living room also has pot lights, so who knows…

(We’ve also been doing a ton of painting, but I need to figure out how to get pictures off of Dave’s camera before I write about that…)

Posted on February 27, 2011, in home improvement. Bookmark the permalink. 1 Comment.

← And now for something completely different…
Painting update, at last! →