Update on the Rose/Jasmine War

Last week, after checking around and determining that jasmine is fine with pretty aggressive pruning, I waged a full-out battle to get the jasmine off of the roses. The red rose was nearly half engulfed but still struggling on. Not only did I pull off all of the vines, I also generated quite a pile of deadheads and had to saw through a completely dry/dead rose stem that was over two inches thick… but I eventually was successful in freeing and pruning the poor thing. Here’s the before:

And here’s how it looks today, a week later:

A few more blossoms are making an appearance, at least…

Next up was the prickly rose. This thing takes up some serious space and is absolutely covered in thorns, so I think I’m going to need falconry gloves or something before I can do any serious pruning. The bush was looking pretty healthy though, and starting to push out some lovely yellow blooms. I did the best I could to get the jasmine off of it, but in the end I had to just clip some vines and leave them. Hopefully I can go back through today now that they’ve dried up and pull them off more easily. Before:

And here’s how it looks today: 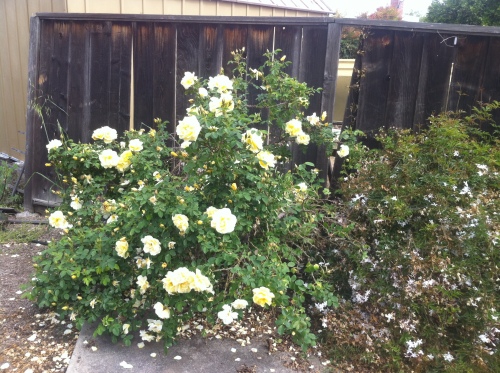 Yes! flowers galore! Anyway, maybe I can procure some rose food today and help the other roses along. The behemoth rose that I tackled a few weeks back still hasn’t produced any flowers, but it has a lot of new growth and a fair number of buds, So hopefully I’ll discover what color it is before too much longer. The other two rose bushes (the ones not being attacked by jasmine) also got pruned finally, but they are pretty small and sickly looking right now. At least they’re blooming…

Posted on April 23, 2011, in garden and tagged jasmine, roses. Bookmark the permalink. 1 Comment.