With our media computer finally functional, we decided it was past time to ditch our “temporary” media storage solution that we’ve lived with for the past four years. It’s an old dresser that we pulled the drawers out of. The horizontal supports were flimsy at best, but we just never got around to shoring them up. This thing was just not wide enough to balance the TV and unnecessarily deep to boot. 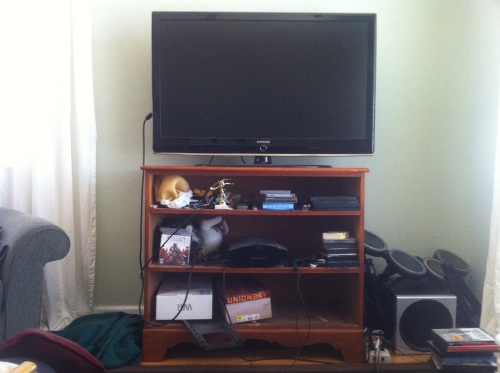 When we started looking for lower/longer solutions, they were all surprisingly expensive, and mostly dark wood. We ideally were looking for something with with some sort of doors we could use to hide stuff behind. We spent a day looking around goodwills and yard sales for something we could refinish, but we didn’t find anything, and since we had finally decided it was time for a change we really just wanted to get it over and done with. So we went for that old stand-by for inexpensive storage, Ikea: 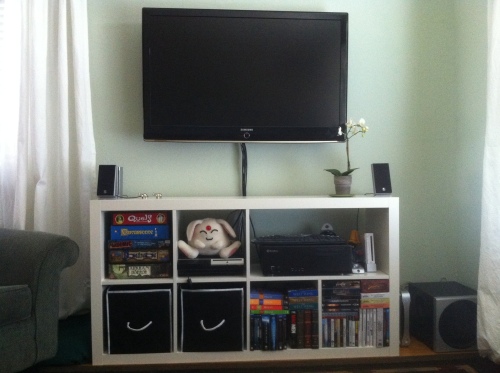 I’ve been waiting for an excuse to get something with cube-shaped cubbies anyway. As a bonus, it was easy to just not install one of the partitions to leave enough room for our media computer on the upper right. I had bought the black fabric cubes a while ago and up until now they had been holding our socks. They could still be holding our socks for all you know. 🙂 Here’s a wider view of our living room, as seen from the front door: 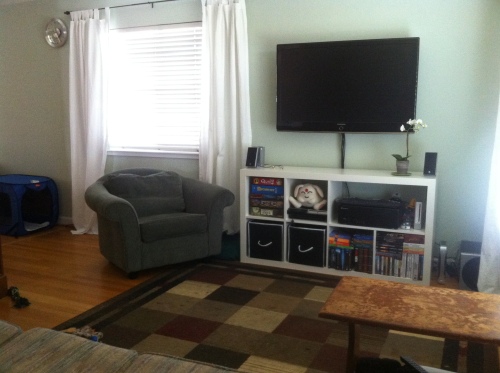 We may eventually cut little legs out of 4×4’s to get it up off the floor a bit, but I think it looks fine for now. And I guess we’ll eventually do something to hide the cables coming down from the TV. Here’s a close-up of the organizational mayhem: 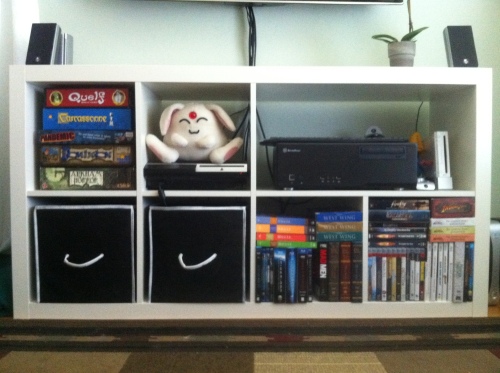 We’ve got board games, the PS3, computer, and Wii across the top, and cubbies, (which actually contain wiimotes and such) movies, and video games across the bottom. Mokona (the white stuffed animal) plays the critical role of keeping the cats from climbing on the PS3.

And now that we have our computer set up, maybe I’ll finally take the time to figure out how to upload pictures from our SLR. I currently mostly just take pictures with my iPhone, otherwise I’d never end up posting anything.

Posted on September 10, 2011, in decor and tagged living room, tv. Bookmark the permalink. Leave a comment.