Just some lights for the garage

The garage did have some lights when we moved in. They were two big tube-lights hung with chain from the rafters. Some enterprising person had run an extension cord from the wall outlet up along the rafters, cut the end off, and spliced the exposed wires to the wires for the tube lights. The home inspector informed us this wasn’t to code. (We weren’t at all surprised.) 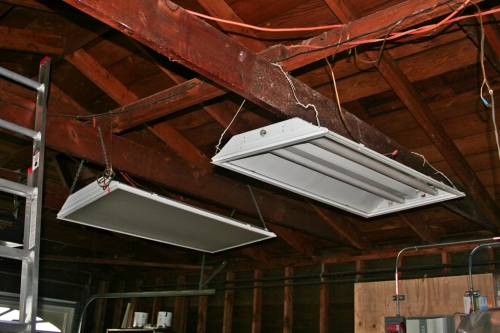 There was also a bare bulb on the wall above the laundry area. This one was to code, but pretty ugly: 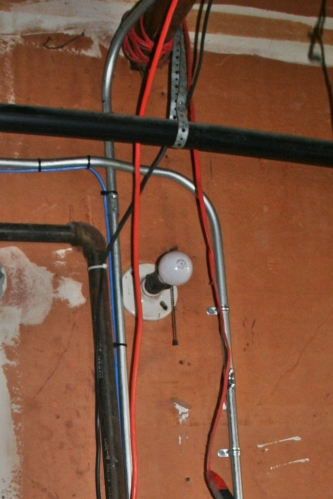 We figured we had 4ish areas of the garage that needed light: the work bench, the workout area, the laundry, and the chest freezer. So we got an inexpensive strip light with 4 spots that we could point where we wanted. Then we shelled out for nice LED bulbs that will hopefully last forever: 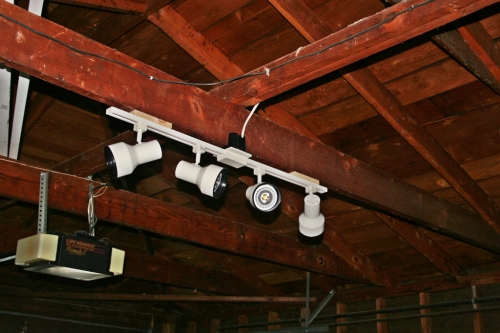 Much better. And instead of an extension cord, we removed the bare bulb light from the wall and ran electrical cable from that up to the new strip lights. Here’s what remains on that wall: 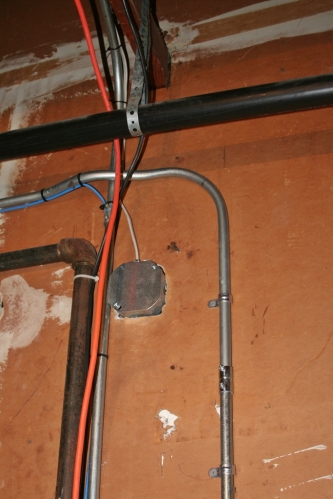 We’re thinking we still will want one more light on the far wall over the work bench though. When we’re using the miter saw it ends up completely in shadow due to the angle at which the light hits it. We do almost all of our mitering during the day so it hasn’t been an issue, but then it wouldn’t be very hard to install a light on that wall, whenever we get around to it.

This all happened back in November actually, but it’s not particularly exciting to write about utility lights. Up next: our toilet! The sad part is I’m not joking about that. Hopefully there will be more exciting things to post about soon though, as we’re finally making some real headway on the master bathroom remodel, and the baby is due in 2 months.

Posted on January 29, 2013, in home improvement and tagged Garage, lighting. Bookmark the permalink. Leave a comment.