← Baby in the Pool!
Baby-Friendlifying the House →

I didn’t really have anything I wanted to blog about, so I decided to walk around the back yard and take pictures of all the stuff I have NOT been doing… See, I’ve managed to keep up with mowing the lawn, but not too much else has been happening with the back yard. The white rose bush is back to behemoth size:

That’s it on the right, probably around eight feet tall? I’m pretty sure I’m going to cut it down to about a foot tall, for real this time. This thing grows like crazy even with horrible neglect, and I can’t keep up with it when it’s taller than me. The jasmine has pretty much completely engulfed the red rose bush, (on the left in the above picture) so I’ll take a swat at that too. I’m thinking at least one of those jasmines just needs to go. Or maybe I should nix the red rose bush? It’s always been the least healthy of the roses I’ve inherited. It makes me cringe even contemplating killing a rose bush though…

I keep thinking I should at least spend a few hours picking apples off it so hopefully those collapsed branches can recover, but there always seems to be something higher priority that I’d rather do instead.

The rest of that fence line is doing a bit better, here it is with the apple tree just visible in the distance:

I managed to unearth the two pink roses from the mounds of weeds they were drowning in. They’re to the right just in front of the magenta bougainvillea in the above picture, they’re hard to see because there aren’t any blooms at the moment. These two roses don’t get any water from the automatic sprinkler system (I should totally remedy that) and yet they STILL keep on trucking.

I hacked back the purple bougainvillea and got a good start in on its jasmine buddy, (in the foreground of the above picture) but I still need to attack the magenta bougainvillea. (back near the apple tree) I’m going to give myself one more year to try to keep up with them, but if they get overgrown again I’m going to call it quits and uproot them.

The stump that the power company left us when they cut the huge yucca tree down has gone and sprouted:

It no longer looks like a decaying stump, at least.

The privet flowered and fruited: 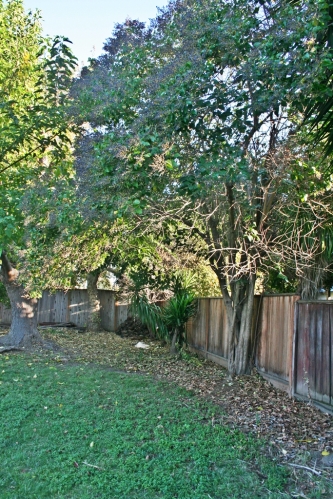 Sorry this picture isn’t super helpful, the privet is the “tree” with the cluster of “trunks” right up against the fence, and there are a bunch of dark berries and leaves in the upper part of the pixture. I’m like, 90% sure it hadn’t produced fruit since we moved in, so maybe it has some sort of multi-year cycle? Anyway, I don’t like it. Really I don’t like any of the trees along the back fence and I want them to go away. But I do like shade and privacy, so I guess I’ll have to figure out my priorities at some point. Blah.

The far side of the house has managed to stay mostly weed-free thanks to my cardboard and mulch laying efforts:

Aaaannnddd the mulberry tree is currently shading the solar panels for part of the day. We got the thing pollarded less than two years ago, and I don’t think I can stomach the expense and hassle of yearly pollarding, so we are having serious discussions about cutting it down. 😦 On the one hand the shade is lovely. On the other hand it grows too fast, and the roots have put cracks in the patio and are probably close to attacking the foundation of the house. Sigh.

← Baby in the Pool!
Baby-Friendlifying the House →