← Helper Tower
Dakota: 1 Year (the start of another set of monthly photos) →

A Year of Monthly Photos

I had a great time getting Dakota’s photo in roughly the same setup on a monthly basis. For posting the new picture each month I just went with whatever cropping and brightness looked good to me, because I knew if I tried to make them all match as I went along it would drive me crazy. After all 12 months were complete though, I figured I could spend a little time and try to make them match a bit better. Here is the result:

Since the belly stickers were all part of the same set and therefore exactly the same size, I was able to use my photo editing software to crop each photo so that the stickers were roughly the same number of pixels across every time. Just for fun, here’s 1 month old and 12 months old together: 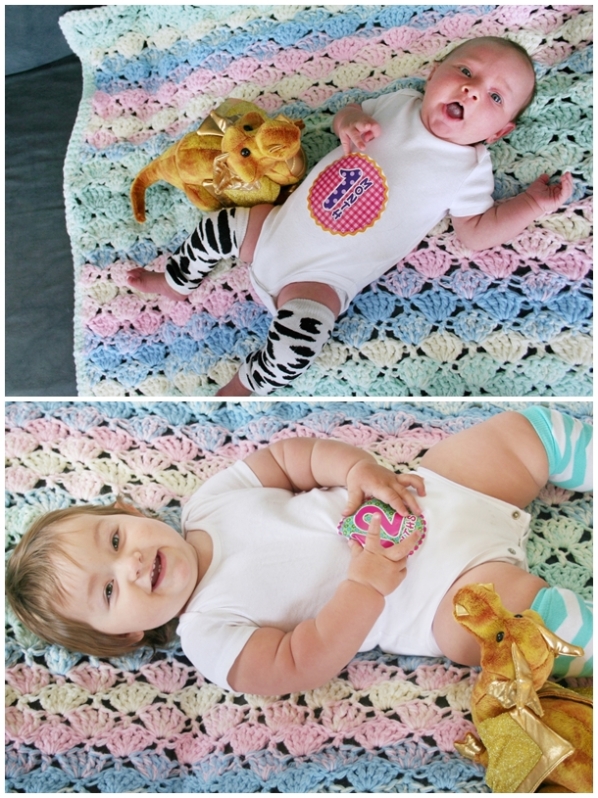 If I were to go back and do it differently there’s really only a few things that I would change. My biggest challenge throughout was getting enough light for a good picture. I had this little hobby photo lighting kit with umbrellas and everything, but having to set it up and take it down was an extra stress and I still generally wasn’t happy with the lighting. I think in hindsight I should have just set Dakota up on the blanket in the middle if the floor. That way she would get good ambient light from both living room windows without the obvious shadow cast by the back of the couch. It also would have made it easier to get up on a stool to get the picture. Dave’s tall enough that he may not have needed a stool at all.

The different colored leg warmers were a bit of a splurge but totally fun. I’ve been a surprised looking back as to which ones actually got the most practical use after they retired from the role of photo prop. The striped ones from the 3-month photo seem to end up matching a surprising number of her outfits, and the solid yellow ones from month 11 are nice and neutral and have been getting a lot of use too.

The belly stickers were a gift, and it was nice to not have to come up with a plan for that aspect of the photo. And again, it was nice to be able to use them after the fact to get all the photos to be roughly the same relative size. But as you can see in the last three photos, it was quite a challenge to keep her from ripping the stickers off towards the end.

I’ve already taken the first of the NEW set of monthly photos, so I’ll have to do another post on that one soon. Spoiler, she’s sitting in front of the fireplace, which is nice and white now. (This time last year it was still brick-colored.) But for now I’m just going to finish this by saying that I love the monthly photo thing, and I’m going to stick with it!

← Helper Tower
Dakota: 1 Year (the start of another set of monthly photos) →