I’m way overdue for some birthday posts, but we spent today puttering around the garden and the yard in general, so I snapped a bunch of pics and will just talk about that instead.

I tend to be pretty optimistic on my seedling starting dates, so unfortunately my basil and tomatoes are more than ready to go in the ground… but we have some predicted overnight lows of 45*F this week, so I’m trying to hold off on transplanting for now. My system of leaving the tomato pots out during the day and tossing my PVC pipe coldframe on them at night has been working quite well though. Here are the 16 plants that fit in the cold frame, they’re in 1 gallon pots, and the coldframe is sitting in the background, where I generally leave it during the day: 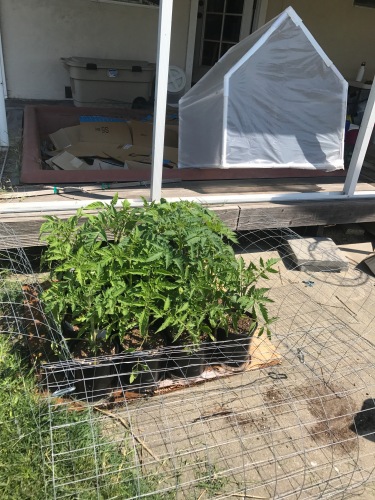 The wire fencing was an impromptu barrier against a rampaging toddler.

The rest of my seedlings mostly stay on this little “greenhouse shelf”: 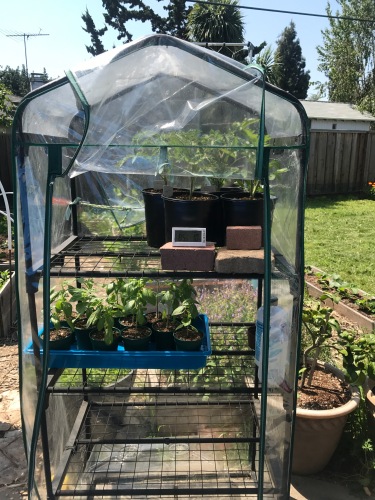 Because the basil plants are still in 4″ pots I worry about them not retaining enough heat at night so I’ve been bringing them in pretty much every night that’s supposed to get under 50*. I’m getting pretty sick of it though, so I think I’ll go ahead and stick them in the ground on the warmest looking night this week and hope for the best. I do have a bunch of individual plastic cloches, so I’m thinking I’ll cover them for the first few nights, but after that I think I’ll just wish them good luck and call it done.

I’m trying again with peppers despite last year’s failure, but this year I’m going to be much more serious about keeping them warm, so I’ll be babying them along in individual pots for quite awhile. I may not put them into the ground until June. I had them on the greenhouse shelf with the basil, but it’s been cold enough I finally decided to bring them back into the garage with the warminb mat underneath and the grow light on top:

It feels so silly to have them under grow lights when it’s so nice and spring-like outside, but it’s not supposed to even get up to 70* for the next week. Bah.

Moving back outside, here are some new things I’m trying this year… potatoes (foreground box) and snap peas (background box):

I planted them both in February, but they spent a  lot of time doing nothing and then finally went to town once it stopped raining. I used the hoop over the potatoes to throw plastic over them and keep the rain off so they wouldn’t get too waterlogged. Once they’re done I’m going to refill the box with soil and put green beans in on a trellis. The trellis that’s currently holding the peas in the other box will get spaghetti squash in a month or so.

Oh and I have volunteer cilantro all over the place. 🙂

And here’s some spinach that’s kinda growing. And non-existent carrots. (I sowed seeds and saw some growth but it’s gone now.) And kale that seems to have survived being transplanted:

Perhaps the spinach would grow better if the toddler didn’t sit on it? Anyway, this is the “partially shaded” box, but it’s a lot less shady now because we just had the tree people in to lop the top off our elderberry:

Okay, that photo isn’t terribly illuminating, but just take my word for it that it’s a lot shorter now. 🙂

Moving along, I got more bare root strawberries this year, and they’re already a lot bigger than when I tried to plant them last year. Good job, self. Here they are, in the foreground and along the left side: 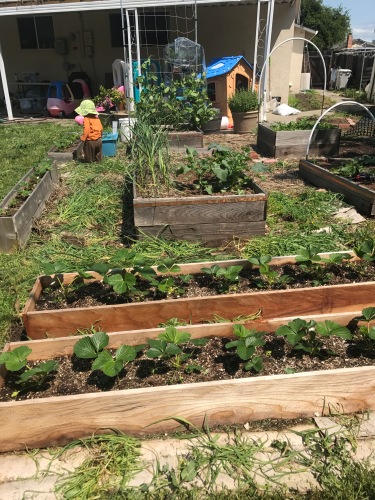 The two new strawberry boxes, the ones in the foreground, should get some afternoon shade, so I’m hoping the plants won’t fry the way they did last year.

One last picture… a friend gave me some calendula seeds last year, which I just tossed around near the back corner of the yard and then ignored. They’ve been happily growing and reseeding themselves ever since:

I really should do a post about that chicken run thing at some point. Ah well. 🙂

Posted on April 10, 2017, in garden and tagged gardening, vegetables. Bookmark the permalink. Leave a comment.