A month or so ago I saw a picture of a TV show quote that Dave and I both love that someone had turned into a large artsy print. I thought it was super cool and decided I really wanted to make my own. I guess I was more in the mood for arts and crafts rather than digital art and high-resolution printing, so I bustled off to the store and procured some super-cheap canvasses, stencils, sponges, and acrylic paint. Here’s the finished “art”: 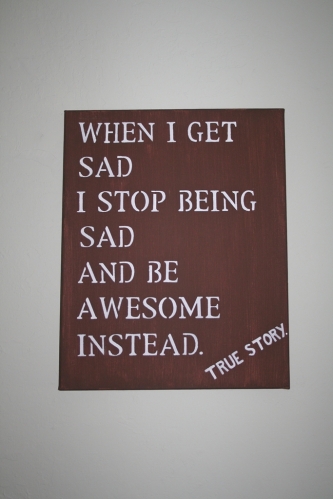 You know, I don’t think that’s even correct grammar. Whatever, it’s a direct quote, and it’s pretty much my mantra, so too bad. Anyway, here are some action shots: 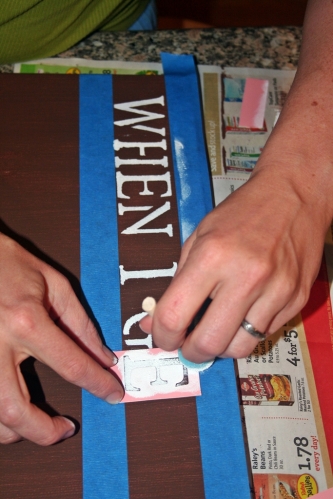 I totally guessed on the stencil size, but it ended up being perfect.

My stenciling technique was pretty bad to start with, but it was pretty easy to go back over it afterwards with a detail brush, so no harm done. 🙂 Here it is as seen from the living room:

It may end up moving if we ever decide what to do with this wall. I kinda want some extra-big art behind the dining table and a modern bookcase of some sort against the wall on the right side of the picture. We’ll see. Here it is from the dining room. With the dining room light in the foreground just because it’s so cool:

I had originally planned to paint over the words so they wouldn’t have the stencil lines in them, but I really just loved how it turned out. I free-handed the “True story” at the bottom because I wanted it to look different. At first I thought it was pretty crappy in comparison to the stenciled letters, but I suppose it’s grown on me.