Storage Bench (For the Foot of the Bed)

We left the foot of the bed frame open so we could store rarely-needed stuff (like newborn supplies and maternity clothes) underneath. But for a while we had an old ottoman stuffed in the opening to give Loki a step so he could get up onto the actual bed. Here was the odd-but-functional setup:

I’ve had vague plans to make a storage bench to match the bed frame, and I was finally able to work on it, in fits and starts. I designed it to be not quite as wide as the actual bed, but at standard chair/bench height. By making the top in two pieces, I was able to cut everything out of a single sheet of 1/2″ plywood. Here are the pieces after painting:

And here they are assembled, minus the top since that gets attached with hinges at the end:

Pretty boring, so I trimmed it out with the same stuff I used on the bed frame: 1×2 and 1×3 pre-primed MDF:

The simplest upholstering job in the world, though I still managed to mess it up a lot. Anyway, I didn’t take any pictures, but after a whole lot of bent staples and some cursing, I managed to get the batting and fabric attached.

I found some awesome hinges that were small enough, with short enough screws, to work with 1/2″ plywood. Dave caught a picture of me screwing them into place:

Although he had a lot of “help” that he had to work around. 😉

Anyway, this was actually a fairly quick project in terms of actual work hours, it just took a long time working around baby and life and such. Here’s the finished bench in place!

I feel like it looks a little odd being slightly taller than the actual bed frame, but I guess it helps keep the mattress tucked in, and it’s perfect sitting height. Here’s another view: 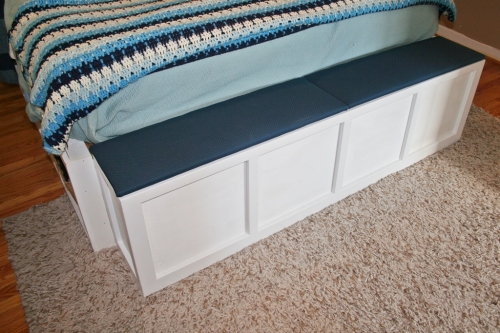 I mentioned that the top is split in two so I could fit it all on one 4×8 sheet, but I actually really like having two smaller pieces to lift, it works great. Here’s all the stuff I’ve already filled it with: 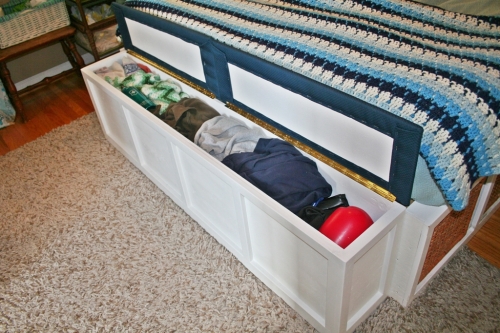 And here’s Dakota checking things out while Loki tries to snooze:

Our bedroom is pretty small, but this bench is narrow enough that we can still move around just fine. It’s such a relief to have even this much more storage space to work with. Now I’m debating making another almost identical bench for the living room under the big window. Hmmm.

I first mentioned that we were building a captain’s bed frame to give us storage space underneath it in this post. And I showed some progress photos of the building process here. But just to recap… neither of us really like dressers, so we’ve been keeping our clothing in baskets. Here’s how it’s more or less looked like for the past year:

(Note the bed placement, because it's going to change...)

The mattress was on the floor, and there were baskets with clothing all over the bedroom. So we bought a bunch of plywood, and every few weeks we’d get a tiny bit more done on our bedframe. The pieces pretty much took over the garage:

(This is after the plywood was assembled, but before the trim was attached.)

It was basically a masterpiece of procrastination, quite possibly our finest work. 🙂 But today, nearly a year after buying the plywood, we finally finished!!! I have to apologize ahead of time, because we set it up in the evening so the lighting was less than ideal for pictures. So here we go…

Here are the painted pieces after we moved them into the bedroom:

(We rotated the bed to make both sides more accessible. A definitely improvement, but you'll have to take my word on it.)

And then we connected the pieces:

(We almost ran out of screws, but I scrounged up some more. Crisis averted.)

Then we put a piece of plywood across the horizontal planks, to make it even more over-built. But I didn’t take any pictures at that point because it was really boring-looking. We also put one of those grippy carpet pads on top of the plywood to keep it separate from the mattress, which was also too boring to take a picture of. So clearly, let’s move straight to the after shots! 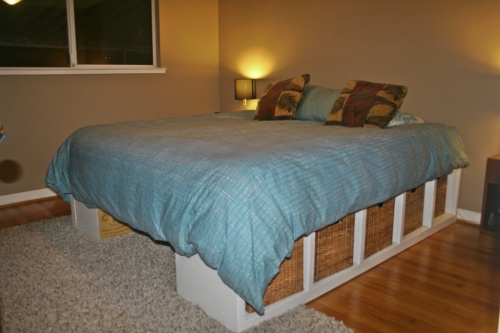 Hm, it looks a little funny because of the open space at the foot. Well, the plan is to build a storage bench to match the bed frame, and that would hide the opening. So at the rate we’ve been going, it should actually be built sometime next year. 😀 Here’s a closer shot of the storage: 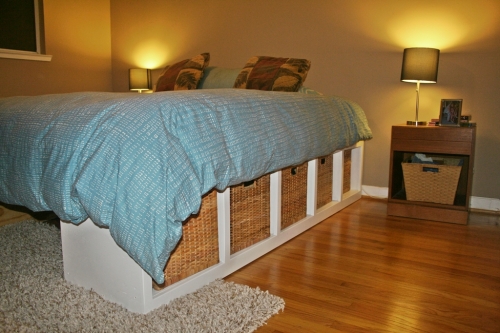 The nightstand is a little away from the bed because otherwise it blocks that last basket. So I guess we also need to build floating bedside tables or something. Oh, and a headboard, now that the bed isn’t up against the window.

Anyway, I’m pretty happy with it, though I haven’t actually tried sleeping in it yet. I’m a little concerned that I’ll roll over to get out of bed and let the dog out at 4am and fall off because we’ve been sleeping with the mattress on the floor for so long. But I’ve managed to avoid that when we’ve been in hotels and such, so I’ll probably be fine…

We have the table saw, at last… and we’ve had the lumber… for months now. 😛 So we’re finally building our storage bed. We’re basing it on this design from Ana White… except… well, we want a storage bench at the foot of the bed, so it makes more sense for the cubbies to go all the way down each side,right? So I started drawing and re-drawing… I was being really indecisive on dimensions, so the final deciding factor ended up being whatever dimensions managed to fit the most efficiently on 4×8 sheet of plywood. After much drawing and erasing, I had this:

Okay, so it’s basically impossible to see what’s going on. Ah well. Essentially we’re building two long/skinny platforms that go along each side of the bed, with 2x4s connecting to two across the middle.

First we cut all of the plywood. Then the next weekend we put the two platforms together. It was a lot of pre-drilling, gluing, and screwing, with some side discussions of the pros and cons of buying an air compressor and nail gun.

At any rate, all of the plywood pieces came together with just the normal amount of adjusting, aligning, and annoyed cursing. 🙂 Here it is all put together:

If you can imagine the platform on the left facing the other way and a bunch  2x4s connecting the two, you may be starting to see how our bed will end up looking. We already have basket cubes ready to be stowed away in each cubby, now we just need to finish! Next up: trim, wood filler, and paint.