I had entertained vague notions of sewing a Halloween costume for Dakota, figuring I had better let my creative juices loose now because in a few years she will have an opinion on the matter and insist on being whatever the equivalent is at that point of Rapunzel from Tangled. (My non-scientific poll of three different little girls has determined that 100% of them want to be Rapunzel. Sigh.) But I hadn’t thought seriously about it until another mom at a playgroup we attend turned to me and asked what Dakota was going to be, adding that she had already bought a ladybug costume for her daughter. This was the last week of September, and my first reaction was, “What? So early…” But then again it’s not really that early if I actually want to sew something. So Dave and I had a Very Serious Discussion about what Dakota should dress up as, and we settled on… Pikachu!

I searched around and found a Simplicity pattern (1767, in case you’re interested) for a hooded, footed baby costume that had a few generic baby animal variations, figuring I could modify the ears and add eyes and cheek circles to the hood. I went out and bought some bright yellow anti-pill synthetic fleece (that was luckily on sale) and small amounts of the other necessary colors in the same material. The pattern also calls for a zipper (gulp) and some elastic:

In terms of other trickiness, the sleeves have elastic in the cuffs, and the “feet” are made with a single pleat, pretty straightforward. The pattern even helpfully suggests using a “narrow zig-zag stitch” for fleece fabrics. I wasn’t quite sure I was using the right setting on my machine, but it produced a zig-zag, and after a few practice runs on some scrap fabric I figured I had it close enough, so off I went!

I’ve never worked with fleece before, but it doesn’t fray or unravel, and it seems to slide through the machine pretty evenly, so I’d say I’ve been pleasantly surprised with how easy it has been to work with.

I’ve also never actually had to attach a zipper before. I avoided it on my wedding dress by kludging together a lace-up back and duct taping myself into it right before the ceremony. 😀 But miraculously I still have the zipper foot that came with this sewing machine! I didn’t do the most even job of sewing the zipper in, but I think the fleece is poofy enough to mostly hide the unevenness:

At this point I could finally see how it was fitting: 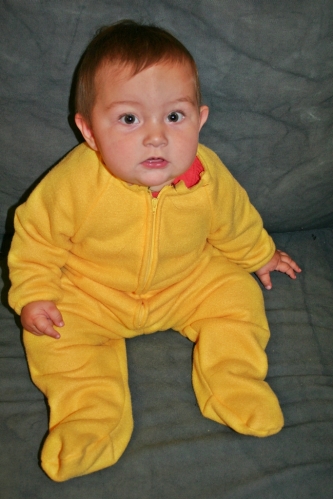 A little big, but the way she grows it may fit her in two weeks. 😉 Anyway, now I have to attach the hood, and then I have to start working on the Pikachu-specific stuff. I think I have the ears modified to what I want. Should I add a tail? It has a pretty distinctive zip-zag, so I would probably either need to use craft foam or wire to make sure it retains its shape.

Well, if all else fails she can just be a fuzzy yellow monster. 🙂