It’s been quite a while, so I have way more than a month’s worth of changes to the back yard to talk about.

First off, two of my neighbors got motivated about replacing our shared fence line, so we took the opportunity to remove the overgrown yuccas that were pushing the fences over and threatening the power lines. The back yard is really almost too sunny in the summer now, but the removal of the yuccas did reveal some pretty birch(?) trees that I didn’t even know existed in my neighbor’s yard. We’re vaguely discussing possible replacement trees, but it’s not a high priority. Here’s how that corner looks now, though the neighbor’s trees are boring and leafless at the moment:

My raised veggie garden beds were over on the opposite side of the house from the chicken coop, but we’ve been slowly moving them over, along with the compost pile. It allows more flexibility in moving the temporary chicken fence so I can let them in and around the beds if I want, and also means less walking to toss the old chicken bedding in the compost. Also, this side of the house is much more visible from the kitchen and dining room windows, so the garden is less likely to suffer from my “out of sight, out of mind” forgetfulness. 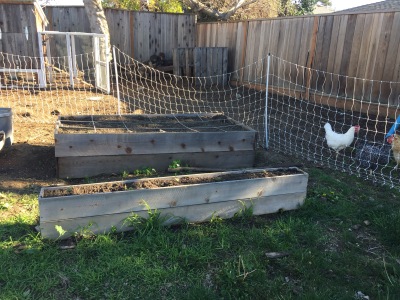 So far I’ve just started planting in the 6’x3′ box, (spinach, cilantro, carrots, bunching onions) and also put in some bare root strawberry plants in the long skinny box. I’m hoping to make two 3’x3′ boxes for tomatoes and basil, we’ll see how that goes. The oregano plant I got last year survived my neglect, so I moved it to a big pot that I had available. The parsley that I put in the ground last year (near the rosemary) limped along all summer then went crazy once it started raining. I’m going to plant some more next month, but I’m hoping after that it’ll just self-seed.

The dwarf citrus trees that I got last March (one each of navel orange, lemon, and lime) are doing okay.  They’re still in their original tubs… the pots I had procured are still too big I think. I guess I should revisit the pots this year, maybe I can buy an in-between size and hopefully not kill them off.

The front yard is still in a holding pattern. I’ve done my best to let the grass die, but it doesn’t make sense to do anything fancy until our theoretical renovation to the house actually happens. It looks like we got a bunch of volunteer poppies that presumably blew in from the neighbor’s yard, so maybe I’ll weed around them and try to encourage them along.