Since moving in we’ve had ye olde double basin sink and boring chrome faucet. I maniacally plotted replacing the faucet from the beginning, but for some reason I assumed that sink basins weren’t interchangeable, so since we weren’t replacing the granite counter tops, I assumed we were stuck with the current sink. WRONG!

Since the faucet was perfectly functional, replacing it never quite made it to the top of our to-do list. But recently it was starting to leak a bit, so I started contemplating replacements more seriously. While I was at it I measured the rough dimensions of the basin, and I discovered that it’s actually a fairly standard size after all. I was still a bit nervous about things not fitting, so while we ordered the new faucet online, we picked the new basin based on what was available locally, so we could return it quickly if things weren’t fitting.

Here’s the hole in the counter after removing the old sink:

And here’s the new single-basin sink and fancy faucet:

We were able to re-use the disposal, and since the new drain hole is farther back there suddenly feels like there’s a lot more room to store stuff under the sink. On the negative side, this type of faucet has a counter-weight on the hose to make it retract by itself, and that was catching on the disposal unit under the sink. So for now we’ve left the counter-weight off, but honestly the lack of auto-retracting on the hose hasn’t bothered me in the slightest. Maybe we’ll revisit later. 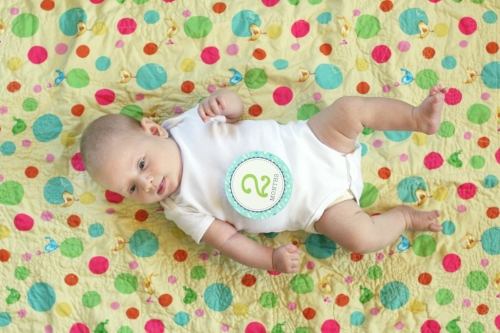 And I just realized I forgot the stuffed animal again. :(Oh well, soldier on! Here’s one month:

And Dakota at 2 months.