The Xmas before last, my “present” for Dave and myself was a garage gym. I scoured the Internet and scored big on Black Friday/Cyber Monday deals, picking up a lifting cage, a serviceable Olympic bar, and a set of composite rubber plates. (The biggest savings were in the free shipping deals… 320 lbs worth of weights can mean a pretty hefty freight shipping cost.) We already had a set of gymnastic rings and a roman bench to round things out. It took us a few months, but we eventually set up part of the garage to serve as the gym space, but at multiple points during the past year we’ve had to stuff random other things in the way to make room for the various projects we always seem to have going. And then I was pregnant… not the best time to get serious with a workout program. But now that I’m feeling fully functional again I’m determined to get serious about my fitness.

So over the course of about a week’s worth of Dakota naps I’ve managed to organize a bit and carve out a decent workout space in the garage, hopefully permanently. Here’s how it stands now: 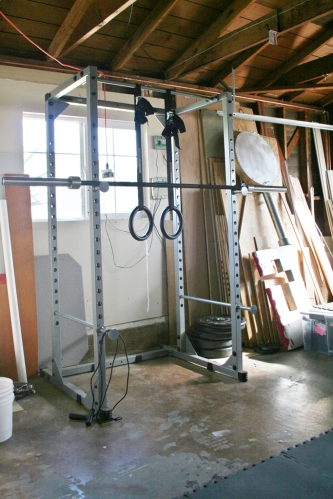 Part of why I chose that particular lifting cage (and why I picked it rather than a simpler squat rack) is because it has a pull-up bar at the top. Since both Dave and I like to do kipping pull-ups on occasion it would probably make sense for us to bolt the cage to the floor… But I don’t think we’re quite organized enough for something that permanent for now. Besides, it’ll probably be a while before I’m able to do kipping again pull-ups anyway.

We want to eventually hang the rings from the ceiling, and possibly add a climbing rope at some point. It would be nice to get some more mats on the floor (horse stall mats ideally), build a few plyo boxes, and maybe even buy a kettlebell or two. Probably the highest priority though is some 45 lb iron plates since Dave’s max deadlift is bigger than our current supply of plates. Once I get sufficiently motivated I’m sure I can score some iron plates for cheap off of Craigslist. But I certainly don’t need any additional weights for myself, so my motivation isn’t all that high for now. 🙂 The other thing that’s missing is a bench for bench pressing. I could probably get one used off of Craigslist as well, but I’m kinda leaning towards buying one new because I don’t want to think about who else has been sweating on it. 😉

Oh yeah, here’s the roman bench (which we use for back extensions) and the mess that is the rest of the garage: 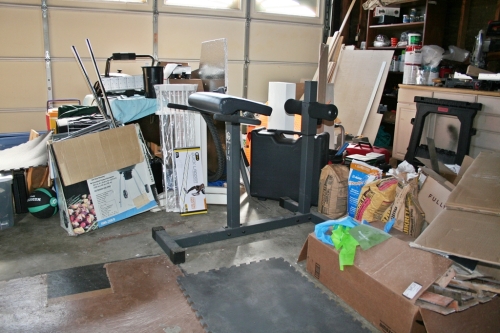 Sigh. We’re working on it. Here’s the view back towards the door… Hopefully we can get the ladder (and the bike!) rigged up so it’s not quite so in the way of everything: 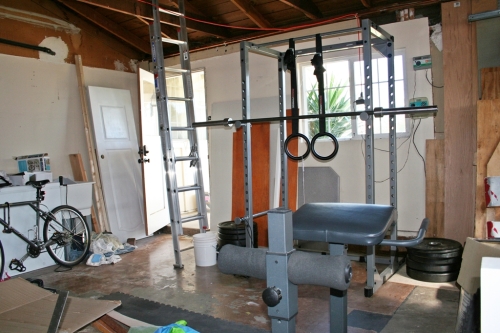 In terms of actual fitness goals, I would like to get back to where I can do some strict plank push-ups and hopefully a pull-up or two. I think that weightlifting is an important component to long term physical fitness, and since we have this nice garage gym I’m in a good place to be able to realistically keep up with a consistent lifting program. I’ve always sucked at running but I also want to get my endurance up to at least a solid base level (you know, under a 10 minute mile at least :P) and I would like to be able to play ultimate frisbee again some day without completely embarrassing myself. On the flip side, I’m fortunate that both my abs and my pelvic floor seem to be recovering well from the whole giving birth thing, but I need to be careful not to overdo any new fitness regimen and mess up my recovery in that area.

So possibly people might think I’m crazy that I’ve decided to follow the Crossfit Football programming to get back into shape, since I’m not exactly an aspiring football player. But I’m pretty familiar with that style of programming, and I feel pretty confident that I’m checking my ego at the door and scaling things like crazy so that I’m getting the right amount of challenge without straining anything. I love their focus on strength and power, and the programming is the right blend to keep me motivated.

The biggest challenge for me is finding time to fit in both the strength workout and the conditioning workout, since there’s one of each of those 4 days per week. Hopefully as Dakota gets more predictable with her naps I’ll be able to fit things in as she sleeps. Right now I rely on Julie as backup to keep Dakota entertained in case she’s not napping well in the mornings. If the workouts that day are fairly short I can knock out both in one session. For the longer ones I’ve been trying to finish the strength portion in the morning while Julie is around, then get through the conditioning once Dave gets home.

We’ll see how it goes!

And now for something completely different…

We worked on max height “box jumps” at the gym today. I was pretty happy with my 35.5″, but then Dave went and jumped 50″. Impressive. Here’s the video: