This post doesn’t really require much in the way of words… We had a Thanksgiving dinner, we made a huge mess in the kitchen, it was fun. Just know that I took a lot more pictures that didn’t make it into this post, and I combined picture sequences where appropriate to reduce the total number of food pictures even more. You’re welcome. 😀

First up, Julie orchestrated the creation of a carrot cake:

And the finished product: (I didn’t catch any pictures of the icing-making process, try not to be too sad about that…)

Julie also gathered the supplies for and started making a cheesy broccoli casserole, but had to run to work, so I finished up:

After that I got caught up in a video chat with family members, so Dave pretty much did all my work for me: cranberry sauce (no picture) and sweet potatoes: 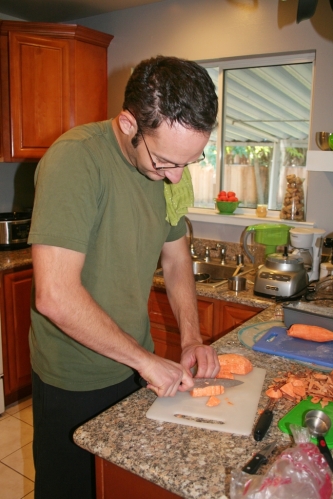 Then Dave went crazy trying out Alton Brown’s super-scientific pie-crust making technique. Apparently I had to get a picture of each step in the process:

Moving along, Here are some sweet spiced pecans: 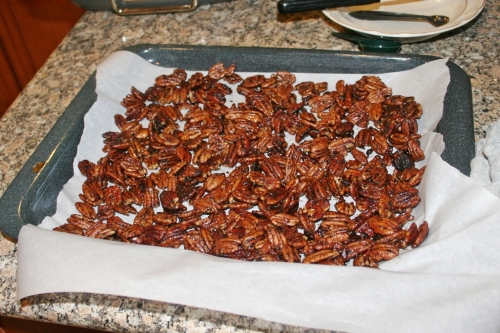 Yup. And here are some garlicky green beans:

And of course, the turkey… Pre-roasting: 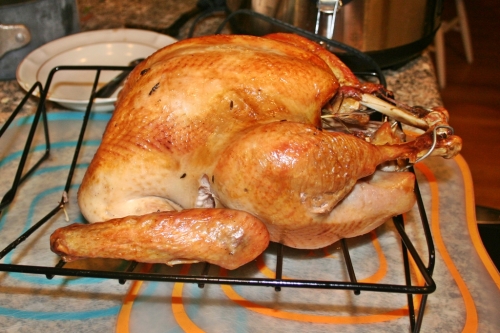 And last but not least, the gravy:

Here’s the table right before we started eating. I’m not going to win any awards for place-setting: 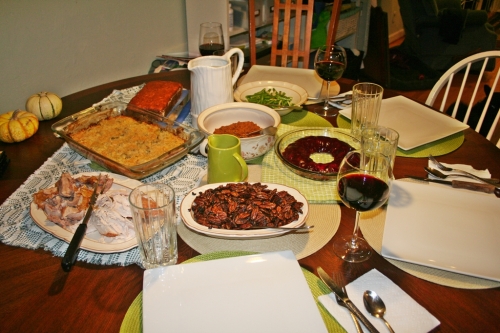 And then we ate it! The end. Thanks for reading. 🙂

Dave’s away on a business trip for the week, so I decided to distract myself by tackling an easy construction project to fix something that’s been a small annoyance in the back of my brain for awhile now. One of the things we improved in the early months after we moved in was our kitchen pantry storage situation. Those deep shelves that we added to the left-hand side of the pantry are still awesome and still working great:

But the right-hand side of the pantry was not working for me. I had originally envisioned it filled with hanging baskets and hooks, but instead it’s pretty much been looking like this for the past year:

Now, neither of the above pictures really show the depth of the problem, because I took them after I had already pulled out a whole lot of  food and set it all on the counter. Yes somehow, all of this was getting stuffed in the existing shelves and baskets: 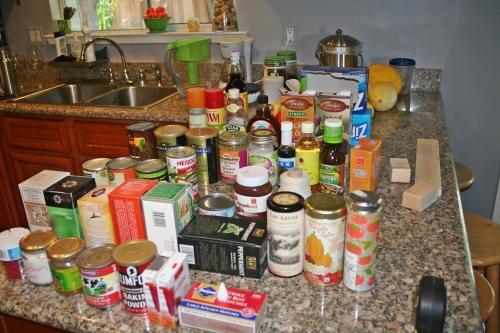 My new vision for the right-hand wall of the pantry was floor-to-ceiling shelving, just deep enough to fit a single 15 ounce can of food. When I measured how much space I had to work with given the placement of the actual pantry door frame, I discovered there was just enough clearance for 3.5 inch shelves. 3.5 inches, how perfect is that!? So I quickly formulated a plan involving 1 x 4 boards with 1 x 2 boards as cleats to support the shelves.

All of the food items in the picture above had a maximum width of 3.5 inches or less, and were therefore candidates for these new shelves. I laid them out like this to group them by height and make decisions on how far apart to put these new shelves. Once I had all of my measurements, I jumped right in:

Here you can see the 1 x 2 cleats getting screwed into the wall. This project was just my speed because it was pretty much all mitre sawing, drilling, and a bit of measuring and leveling. We even had the studs already marked since we screwed those metal baskets into them last year.

The only hitch was when I had to cut out notches in the shelves for the weird bump-out we have going on at the back of the pantry. It was my first time using our swanky new portable jigsaw. (I’ve decided I’m NOT a fan of a laser guide on a portable jigsaw, but I didn’t really bother to take the time to figure out if there was a way to turn it off.) And then I had some trouble jimmying the notched shelves into place since I had foolishly already screwed in all of the cleats: 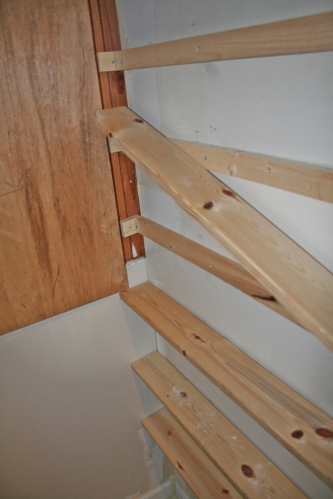 I ended up having to unscrew those upper cleats to get the notched shelves into place. Ah well, it was still a pretty quick process. My other problem was that I had measured and planned out for nine shelves, but I only had enough wood on hand for six shelves. Boo. I decided going out and picking up 2 more boards was way too much effort, so I just left the pencil marks on the wall and I’ll add the last three shelves at some later date. Six new shelves were enough to hold everything I had laid out on the counter with room to spare:

And they don’t really take up any previously useful space, so the pantry can suddenly hold a lot more. I especially love how easy it is to see all of the different food items, something with which I had been struggling with the deeper shelves on the left-hand side.

Julie is pretty happy too, since she’s been stuck storing pretty much all of her food in a big wire basket on top of the refrigerator ever since she moved in with us. We went out and bought a few cheap plastic baskets today and used them to help organize some of the smaller things that are still on the left-hand shelves in a bit less haphazard fashion. (This was after I finished taking pictures, sorry.) Julie buys a lot more canned goods than I do, so now I just need to get those last 3 shelves in on the right-hand side and I think the top of our refrigerator will actually be pretty much completely freed up again.

And all of this while 20 weeks pregnant! Does this count as nesting? 🙂 Really the only time being pregnant came into play during this project was that while sitting inside the pantry screwing the cleats into place I could smell this faint whiff of something rotting. My powers of scent have been greatly enhanced, so I’m pretty sure this is something that I wouldn’t have even noticed before getting pregnant. But I took a break from drilling to pull everything off of the floor and scrub it down, and the smell went away. I guess this will just be a reminder to myself to make sure that I occasionally give the pantry floor a good cleaning in the future.

This post is a little late, but you know, that’s me. 🙂 We managed to start decorating a little earlier this year than last year,  and we managed to add a few more decorations this year. Mostly we decided that our front walk is a bit dark, so we found some light-up decorations to spice things up. We put up some orange and purple “xmas lights” lights over the garage:

They were only up for for less than a week, but since we left up the gutter hooks from last xmas, they were very quick to put up and take down. And it gave Dave and excuse to see how the solar panels are doing.

Our other illuminating addition was a series of cheap plastic light-up pumpkin heads on stakes:

They served their purpose admirably. And that reminds me! I transplanted the allysum and chrysanthemums to border the front walk here. The chrysanthemums  had already been transplanted earlier this year in around the lavender, but the lavender suddenly decided to have a growth spurt so things were looking crowded. They’re still going strong, though they are overdue for some deadheading. Hurray for “annuals” when it never freezes. 🙂 Here’s the front walk from the other end:

That one allysum in the front looks like it won’t survive the transplant. And I need to sweep the walkway. Sigh. But everything was looking pretty halloweeny, huh? Here’s a closer view of the front patio:

It looks more or less like last year, though we did upgrade the ghosts from the “rags and sharpie” things we had before: 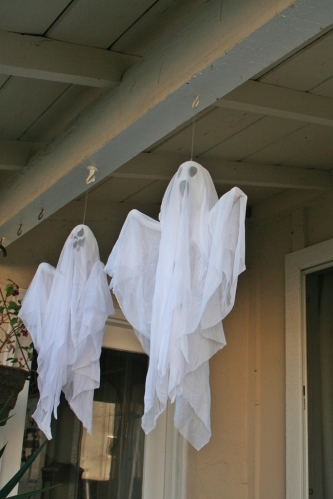 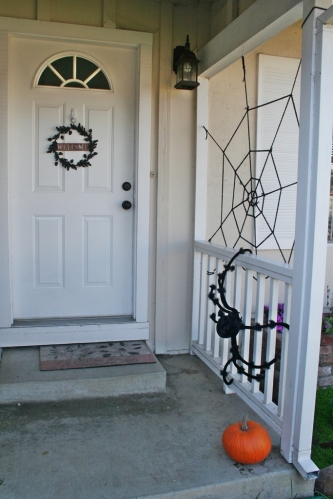 I wish I could say I was talented enough to tie together a spiderweb out of yarn, but I found it in the clearance section already pre-tied. Much easier.

Anyway, we had a good halloween and we have some leftover candy to enjoy, so we’re all happy here.