← Dakota: Eight Months Old
On the Needles, on the Hook → 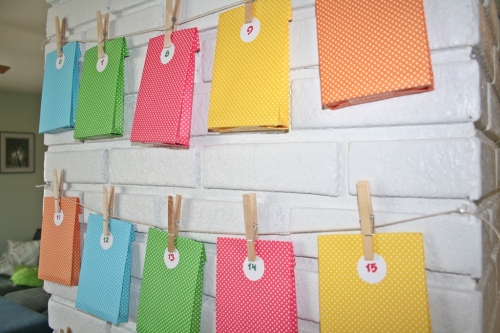 I think it’s safe to say that I barely knew what an advent calendar was before Pinterest came along. Now I can’t live without one! Darn you, Pinterest! 😉

Anyway, last year’s calendar was a bit late and not too exciting looking, but we still thought it was awesome. This year I stuffed my pockets with coupons and headed out to Michael’s… Not exactly with a plan, but with some vague ideas of what I wanted to do. Here’s what I ended up with:

Three dollars worth of colorful card stock and some quick googling on how to fold a piece of paper into a baggy. And since the camera was handy, here is my garbled attempt at explaining how to fold a paper bag…

Fold in half and tape the edge opposite the fold:

Fold both of the long sides in a little bit (I cut a piece of scrap paper as a guide to keep the fold sizes consistent):

Unfold and refold the sides so the middle folds point inward. You know, like the sides of a paper bag:

Now fold the bottom up (I used the long side of my piece of scrap paper to keep this fold a consistent size):

And brush off your mad origami skills to press open the bottom so it looks like this: 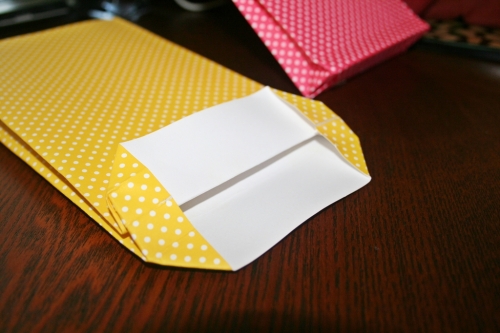 Then fold the open edges in so they overlap, and tape them together:

Now you have a bag! Mine is tall and narrow so I can fold the top down: 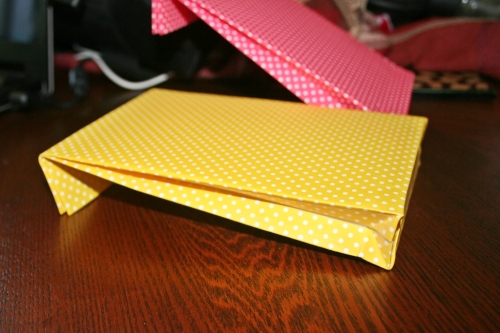 I also picked up a number stencil while I was at Michael’s, and after some contemplation I put the numbers on little circles of white card stock. I used a shot glass to trace the circles. 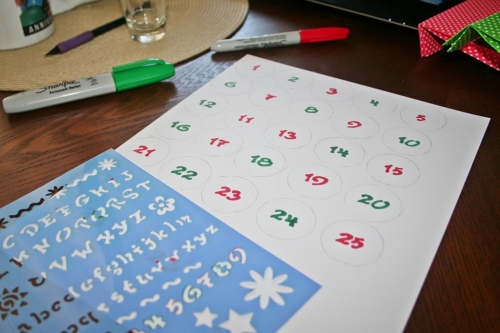 To hang, I knew we had plenty of ribbon and twine around the house so I didn’t have to buy anything. We settled on twine… And I have tons of clothespins, so that was a no-brainer.

For now we’re just putting chocolate in the bags for us grownups, but maybe I’ll add more fun stuff in future years. Whatever will keep this little one entertained!

← Dakota: Eight Months Old
On the Needles, on the Hook →